Supporting Commerce & Housing
The City of Tumwater and Thurston Regional Planning Council partnered on a study to support the transformation of the Brewery District into a vibrant, mixed use, and walkable area that supports commerce and housing. This work expands on the study conducted by the City of Tumwater about the former Olympia Brewery in 2011. 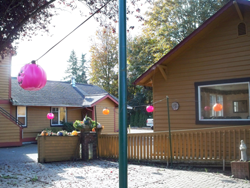 This district includes the former Olympia Brewery and the triangle of roads formed by Custer Way, Cleveland Avenue, and Capitol Boulevard. The district extends north to the Sunset Life property and south to "E" Street. Planning for the area is a priority of the City of Tumwater Strategic Plan.

History of the Brewery District
The Brewery District is part of the oldest portion of Tumwater. Located near the Deschutes River, the area was the original location of the 1st American settlement on Puget Sound, and included a variety of commercial businesses and operations that took advantage of the river’s power for manufacturing. Construction of Interstate 5, however, displaced this historic settlement, particularly the commercial portion. The historic downtown was destroyed and commercial businesses moved east within the neighborhood, and south outside of the neighborhood. Closure of the Olympia Brewery in 2003 further impacted the area, leaving a large brownfield in the center of the Brewery District.
Perfect Time for a Transformation
This study identified the tools and opportunities needed to revitalize a walkable commercial and residential area in this historic portion of Tumwater. Given the amenities available in the district and possible adaptive reuse of the Olympia Brewery, the City of Tumwater and the Thurston Regional Planning Council believe that it is a perfect time to work towards the Brewery District’s transformation.
The final report and updated regulations can be found on the City of Tumwater's Brewery District webpage.
Receive Notifications
Agendas & Minutes
Opportunities to Comment
Public Participation
Contact Us
[]