Goal
Ensure that the region's water supply sustains people in perpetuity while protecting the environment. 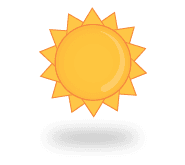 Sunny, future looks bright.
The region is on schedule to meet its 2020 target.

Why is this important?
Thurston County’s water supply comes from both groundwater and surface water. Both are replenished by precipitation. As population increases, water usage has also increased. Concerns have been raised over having adequate water to sustain people — including residential, commercial, and agricultural activities — while retaining adequate amounts of water in streams to protect and preserve instream resources and uses. Using the water we have more efficiently becomes more important as population increases.

Key Observations
Water use per capita decreased significantly between 2010 and 2015, the last dates for which data are available. With an increase in population, use of domestic and public supply water also increased.  However, reductions in water use for industry, irrigation and aquaculture have offset this.  Overall, water use has decreased since 2005, and the region is on schedule to meet its 2020 target.