Growing a Community Park from the Roots Up

In her travels around the community, Alicia Elliott kept returning to the blight on the corner of Harrison Avenue and Division Street — a major intersection in west Olympia. “We can turn this eyesore into a neighborhood asset — a park for us,” she thought.

The West Central Park block grew from the roots of that transformational vision. Armed with her real estate experience and a focused drive, she planted a section of the park in 2012. By 2013, The West Central Park Project nonprofit formed with a clear direction: “We envision a green, walkable neighborhood and a resilient, connected community.”

Now, five years in, the park hosts Sunrise Easter services, summer movies, and free concerts that provide an opportunity for everyone to sit and just be “normal humans” together.

But the park was just part of the plan. Elliott purchased additional land, and keeping the bones and historical roots of the land and buildings, she created the bright corner for Phoebe’s Café. Her plans also call for an art center “with a kiln, studio and retail space, and classrooms” and later a repurposed building dedicated to music.

As we talk into the late afternoon, the sounds of saws and hammers signal more progress — on a bed-and-breakfast spot, a commissary to support the carefully planned spaces for three food trucks, and a restaurant — likely vegan. One of the carpenters stops for a chat, exuding enthusiasm for this project — for repurposing rather than replacing older buildings.

Elliott and the carpenter discuss some frustration with jurisdictional parking rules, noting that people from the neighborhoods can bike or walk and others can ride the bus. They know folks need parking, but is it the highest and best use of this land? They also talk about the need for more incentives to repair and restore older structures.

The park is built on partnerships. Elliott adorned her office walls with artwork from some of the partners — colorful flowers and intense line drawings — created by several people who are homeless who have joined the weekly Sunday Work Parties. She thanks Gloria Dei Lutheran Church for its support on the farmers’ market and fundraising, Senior Services for South Sound, and Community Youth Services. She also applauds Intercity Transit’s actions to move the bus stop just a bit to allow for better access. “I’m striving for sustainability in every step — including stewardship partners,” says this “mother” of the park.

When the former Olympia Brewery blew its final whistle, one of the largest employers in Thurston County closed its doors to hundreds of family-wage workers in Tumwater. The closure left a painful jobless scar and a collection of deteriorating buildings near Tumwater Falls. Miller SAB’s sale of the Olympia Brewing Company stipulated that the production of alcoholic beverages was forbidden to take place on this historic Tumwater property, ever again.

With abundant water, fresh hops, and entrepreneurial spirit, the tradition of brewing lives on in the South Sound. Several local microbreweries have started since the Olympia Brewery closed, including Lacey’s Top Rung Brewing and Olympia’s Fish Brewing, Three Magnets Brewing, and O-Town Brewing. Craft distilling also is establishing a foothold, with the likes of Tenino’s Sandstone Distillery and Olympia’s Shoebox Spirits.
Tumwater is also capitalizing on this growing market, bringing together like-minded brewers and distillers in the Craft Brewing & Distilling Center, now under construction in the Deschutes River Valley, near the former Olympia Brewery. The project, part of Tumwater’s nascent Brewery District, will be a “Center of Excellence” for Washington’s rapidly growing brewing and distilling industries.

“The Center of Excellence would have a regional focus to facilitate craft brewing and distilling activities, extend industry research, education, workforce training, and public information,” noted a City fact sheet. “Such a facility would serve as an incubator for small brewers and distillers and provide public amenities such as a museum, river walk, trail connections, and preservation of the iconic and historic Old Brewhouse.”
South Puget Sound Community College (SPSCC) plans to lease space for its new craft brewing and distilling program. Next fall, SPSCC students will be able to begin work on a degree in brewing, distilling, and cider-making — a program that is believed to be the first of its kind in the nation, according to Noel Rubadue, the college’s Dean for Corporate and Continuing Education.

In addition to SPSCC, Heritage Distilling of Gig Harbor is committed to locating its operations at the Craft Brewing & Distilling Center. While construction is underway, long-term plans for the site are still being worked out between the City and the center’s developer, John Peters, according to Tumwater City Manager John Doan.
The opportunity to develop the center as a public-private partnership, reintroduce an important piece of Tumwater’s heritage, and build support for a much-loved industry is a big win for the City of Tumwater and the region, Doan said. Indeed, the center will help the region achieve several Sustainable Thurston goals, including: [Goal EC-2] Foster industry clusters to create jobs and increase revenue circulation locally, and [EC-6] Foster a progressive education system to match worker skills with employer needs.

“This project is a step in the right direction for the City of Tumwater,” Doan added. “It not only will fulfill the objectives of Sustainable Thurston, the center will provide training, create jobs, and promote economic vitality.”

Passing through Rochester on your way to the coastal beaches, you might not give a thought to what’s there. It’s unincorporated, it’s rural, it’s on the Bountiful Byway. And it’s got more going for it than you might see with just a glancing look: Rochester has a main street (US 12), sidewalks, neighborhoods, great local businesses, and a public passionate about its community.

Thurston County is taking note. In 2016, the County secured funding to study Rochester’s commercial core (generally from Bailey’s IGA to the intersection with 183rd Ave. SW) and consider ways to balance US 12’s dual role as an important regional transportation corridor and as Rochester’s “Main Street.”

Dubbed Main Street Rochester, the ongoing project is looking at ways to expand opportunities for getting around (and through) Rochester safely, strengthening Rochester’s community identity, and helping businesses succeed. Ultimately, the County wants to know what infrastructure improvements (sidewalks, stormwater, etc.) are most important to the community and support these goals so that it can prioritize the work that needs to be done.

Since Rochester is unincorporated, improvements to the highway corridor are generally the responsibility of the Washington State Department of Transportation (WSDOT). Coordinating and partnering with the state agency is imperative to the success of this project.

In November 2017, the project team — which includes TRPC staff — hosted a technical workshop and asked state and local government members and other strategic implementers to walk the corridor, look at it in more depth, and identify problems and possible solutions. From the viewpoint of these experts, the success of the project relies on capturing the community’s vision as part of planning efforts and forging a strong partnership between Thurston County and WSDOT to make implementation of the community’s vision possible.

To capture the community’s vision, the project team is seeking the community’s input through a community focus group, public workshops, and surveys geared to businesses, residents, and Rochester Middle School. As of press time, more than 900 people had responded to the community survey; responses include:

Thurston County’s stormwater utility also is looking at ways to improve drainage in the Rochester area.  A stormwater pond is anticipated to be built in 2018 to reduce flooding in front yards, and a drainage study will help the County understand the issues south of US 12 near the commercial core.

As Thurston County continues to take a closer look at the area, it’s paying close attention to the community’s vision for its future and ways to keep Rochester’s sense of place and civic pride at the forefront. Such efforts are helping the region achieve Sustainable Thurston’s goal for South County city and town centers [Goal C-2]: Create safe and vibrant South County city and town centers that foster entrepreneurship, active transportation, civic pride, and a sense of place. 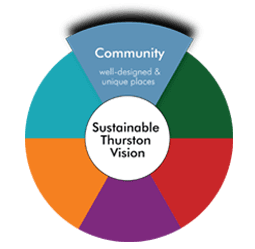 Growing A Community Park from the Roots Up