Some might disagree with the notion that a bank or credit union is the backbone of a small-town economy. But what if your town’s bank closes its doors and consolidates operations elsewhere?  What if the only financial institution left in town is a branch operation with limited services, run out of a grocery store?

Tenino residents can tell you the answers. When Key Bank shuttered its branch at 149 Sussex Ave W. in 2015, O Bee Credit Union’s small branch in the local grocery store was the only financial institution left in town. Key Bank put a restrictive covenant on the sale of its former building, a move that would have prevented its use as a bank by any potential buyers.

When City officials found out about the restrictive covenant, they pressed Key Bank to remove this condition of sale, reasoning that the highest and best use of the building was a financial institution. Key Bank relented, and O Bee Credit Union was able to buy the property and move into the prime location along Tenino’s “Main Street.”

“KeyBank was approached from the top, bottom, and middle to make it clear at every level that Tenino would not quietly allow what we feel is our financial center to be shuttered,” said Tenino Mayor Wayne Fournier, whose City Council adopted a resolution declaring the importance of the building to the historic downtown and to the city’s residents of all ages and abilities.

Opening in October 2017, the newly remodeled building ensures that residents and businesses have a place to bank a short distance from a post office, library, restaurants, and other businesses and services. The new bank also adds jobs and recognizes the community’s roots: Historic photos of Tenino and the Olympia Brewery are displayed throughout the bank’s interior.

“Their brewery history has always been part of their culture, but this building embraces their roots,” explained Joyce Worrell, past president of the Tenino Area Chamber of Commerce. “The pub atmosphere is reminiscent of the brewery tasting room where the community met and workers gathered after the end of a shift.”

The new bank and community coordination behind it are consistent with several Sustainable Thurston goals, including: [EC-1] Coordinate economic development efforts to attract and retain businesses and jobs; and, [C-2] Create safe and vibrant South County city and town centers that foster entrepreneurship, active transportation, civic pride, and a sense of place.


During its 2015 retreat, the Thurston Regional Planning Council asked agency staff to develop a State of Our Transportation System report that answered a simple question: What is the current state of our transportation system?

In 2017, staff members worked with TRPC, the Transportation Policy Board, and local and state partners to develop the first of what is envisioned to be a series of reports. The first report focused on pavement preservation, bridges, and fish passage barriers.
Such work helps move forward Sustainable Thurston transportation action T-1.01: Dedicate sufficient revenue to pay for system maintenance and preservation. Raise additional revenues for this purpose if necessary through Transportation Benefit Districts or other means.

We learned that:
Overall, we learned that there isn’t sufficient funding to maintain or repair our existing transportation system.

“We know that even with new funding authorized by the voters, it will be challenging for Tumwater to maintain our streets and sidewalks at a level our residents have come to expect,” explained Tumwater Mayor Pete Kmet. “And this doesn’t address traffic congestion, and environmental needs like stormwater treatment and improving fish passage under roads.”

In coming years, TRPC hopes to explore a broader range of topics, such as sidewalks, trails, transit, and stormwater facilities. 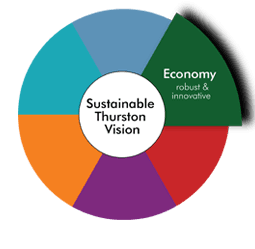