Streets and roads are one of local governments’ largest assets to maintain. In Thurston County, cities and the county spend over $10* million a year maintaining some 1,600 miles of local public roadways – or around 2% of their total budgets. But even with this investment they are losing ground. Local staff estimate that it will require over $25 million a year just to keep roadways in their current condition. Investing now will save money later, as regular maintenance extends the lifetime of pavement. If pavement condition declines too much, the roadways require rebuilding – which is both costly and disruptive to traffic flow.

State of our Pavement

Local governments inventory the pavement condition of their roads regularly. In general, residential or neighborhood streets are in better condition than the major roadways that serve as the backbone of our transportation network. Arterials and collectors link communities, anchor our commercial and industrial areas, and carry more traffic than residential streets, including trucks, buses, and other large and heavy vehicles. 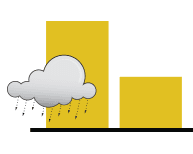 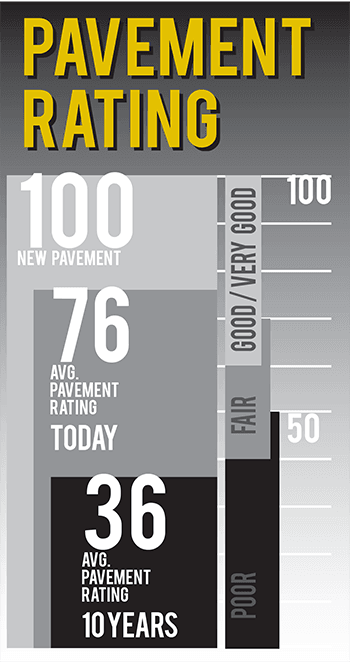 Local jurisdictions use pavement management systems to assess and prioritize their roadways. The systems are designed to guide investments to a “Best First” approach, recognizing that regular maintenance is much more cost effective than allowing a roadway to deteriorate and then rebuilding it. The backlog of deteriorated roadways, however, make it necessary for some funding to be directed to rebuilding roads.

Read more about the benefits of regular maintenance.... 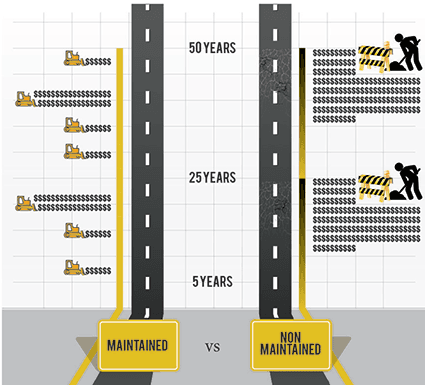 Local governments rate pavement on a scale of 1 to 100, with 100 being brand new roadways. While the cities and county all have slightly different ways to inventory and rate pavement condition, in general, poor pavement has a rating of 0 to around 40 or 50. Fair pavement has a rating of 40 or 50 to 60 or 70. And good and very good pavement ratings are over 60 to 70. Today, the average pavement rating of all roadways in the County is 76. In ten years or so, local staff estimate that it will drop to 36. This means we’re losing ground each year, and while roadway condition deteriorates, the backlog of unfunded and costly rehabilitation projects grows.

Sources of funding for pavement maintenance include:

Over the last few decades, caps on property tax, changes in fuel tax distribution of new funding (such as the Connecting Washington package), and rising costs of maintenance have led to an acute shortfall in maintenance funding necessary just to keep roadways in their current condition.

Local governments have responded by passing Transportation Benefit Districts – and increasingly, regionally allocated federal funding is being directed towards pavement maintenance - but these sources don’t generate enough funding to keep up.

Local government budgets are stretched thin to meet all the competing needs – but this is one place where investing now saves money in the future. Building new roads and bridges is an opportunity for ribbon cutting and celebration – we need to learn how to celebrate maintaining them as well. This is not just a local issue – communities across the nation are beginning to identify new sources of funding for infrastructure. As Washington State begins work on a new transportation infrastructure funding package – it will be important to keep maintenance on the list of priorities. Over the next few years, TRPC will dig deep into transportation financing – to get the region prepared for the discussion.